Everything You Need to Know about Tipping in Washington, DC

For many travelers, tipping is a big source of anxiety, but it doesn’t have to be. When you travel, knowing the local customs can take a lot of the worry out of the equation. Tipping in Washington, DC is very similar to tipping in most parts of the U.S. So if you are a domestic traveler you are probably more knowledgeable than you think. Here’s how you can prepare yourself for tipping in Washington, DC.

When you arrive at the airport, the first person you’ll probably find yourself tipping in Washington, DC is your driver into the city. Unless you’re taking the Metro, you will probably use a taxi, Uber or Lyft. For taxi drivers, expect to tip 15%. If they help you with your large luggage or are especially friendly, go up to 20%; the same goes for Uber and Lyft.

Uber is actually very hotly debated when it comes to tips. When Uber launched it was exclusively a luxury car service, with Towncars and black SUVs. The prices were more expensive than a taxi and Uber very clearly stated that the tip was included.

However, over time, once Lyft and Uber X were created, that model didn’t make sense anymore because the rates were so low. Lyft has always allowed tips. Uber eventually relented and did the same. So now for both services you tip in the app at the end of your ride.

When you arrive at your hotel, a bellhop may help you with your bags. If they bring your bags up to your room (or if they store them because you arrived early), then you should tip around $2-$3 per bag.

Assuming you don’t use the “Do Not Disturb” sign during your entire trip, you can tip cleaning staff $3-$5 per day. It’s important to leave these tips daily because the staff rotate and different people may clean the room on different days. If you wait and leave one lump sum at the end, you could unintentionally shortchange someone who cleaned the room earlier in the trip.

In general, you don’t need to tip the front desk staff. Whether or not you tip the concierge depends on what they did. If they just recommended a restaurant or a tour, no tip is necessary. If they did something that takes a bit of work, like getting you show tickets or sports tickets, $5-$10 is about right.

On the other hand, if they did something exceptional, like get you into the hottest restaurant on a Saturday night, then tip $20 at least. Keep in mind that concierges often earn commissions from the businesses they refer to, so if they book you on a tour, they might be earning 20%-30% from that tour company. Doing your research beforehand can help you be aware of things like this.

How much you tip your tour guide depends entirely on what type of tour you picked. If it’s a public tour, where you paid per person and are going around with other tourists, $5-$10 per person is about right. So if you’re a family of four, that’s $20-$40 for the family.

If it’s a free tour or a “pay what you’d like” tour, then it goes up to $10-$20 per person. So a family of four would be $40-$80. If it’s a private tour, then I would start with 10% of the tour price. Or ask the tour company what their policy is. Some of them will specifically say that tips are not required on a private tour.

Lastly, if you’re attending a park ranger talk or a Capitol tour led by a government employee then no tip is necessary; it is actually illegal for a federal employee to take a tip.

Tipping Your Servers and Bartenders

When you eat at a restaurant, the tip should be 20% of your total bill. An easy hack to calculate this is to take 10% by moving the decimal point one spot, then doubling that amount. So if your bill was $40.00, ten percent of that would be $4.00 (by moving the decimal one spot to the left). Double four and your tip is $8.00.

Bartenders are a little tricker. If you’re just walking up to the bar to order a beer or wine, then a dollar per drink is fairly standard. If you’re ordering a fancy cocktail, go with 20%. Same goes for ordering a bunch of drinks on a tab: go with 20% when you close out at the end of the night.

May 14, 2017 Monuments in DC: 7 Tips for Your Visit Read More
September 1, 2019 Ideas for Free and Cheap Things to Do in Washington DC Read More 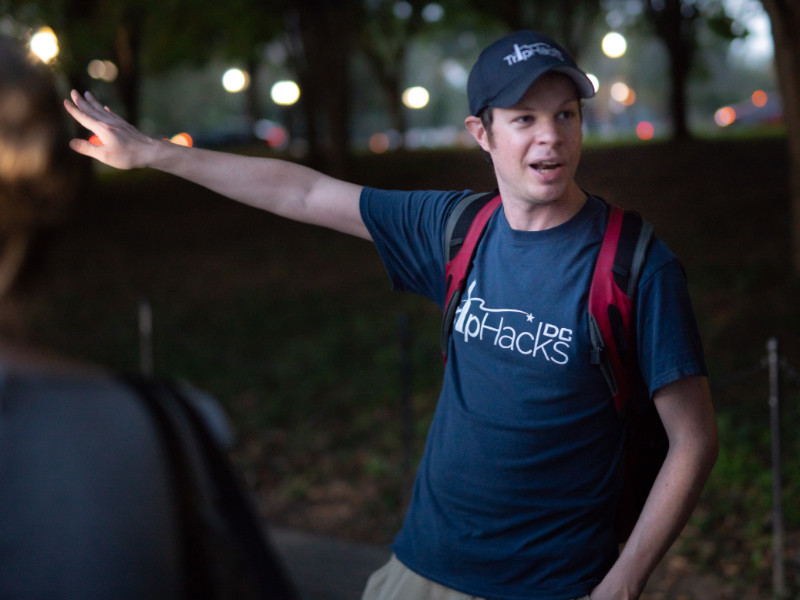